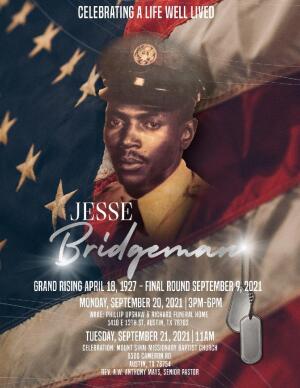 Retired Master Sergeant Jesse L. Bridgeman Sr. made a peaceful transition on September 9, 2021, at the age of 94. Jesse was born April 18, 1927 in Claiborne Parish, Hayneville, Louisiana to Mattie Collier and Jesse Bridgeman.  He served in the U.S. Army, and U.S. Air Force from 1945 - 1966.   In 1955 he married the love of his life, Phyllis (Audrey) Middleton of St. John New Brunswick, Canada. Phyllis and Jesse shared 66 blessed years of marriage and five children were born to this union.

Jesse accepted Christ at an early age and joined Mount Sinai Baptist Church in 1967. He was a devoted and active member until his health failed.  He took great joy working with the Sunday School; ringing the bell to begin classes and closing it out in preparation for 11 o’clock worship. He served as Sunday School Superintendent for many years on 22nd Street and the 38th½  Street campuses.  Jesse started his second career with the City of Austin Power and Light Company in 1968 retiring from what is now Austin Energy in 1988.  After retirement he enjoyed spending even more time with family and caring for his grandchildren.

To send flowers to the family or plant a tree in memory of Jesse Lee Bridgeman Sr., please visit our floral store.